Join us for this year’s annual Woman’s Board lecture and hear from acclaimed artist Ed Ruscha, as he speaks about his prolific career and practice that spans drawing, painting, photography, film, printmaking, and publishing.

JEFFREY BROWN: This attraction of yours to the road, to what’s along the roadside — it began in your youth, I guess? Tell me, where did it come from?

ED RUSCHA: I traveled around a bit with my family on driving trips of the western U.S., and maybe that — these long drives, mostly on US 66 and other roads, too — maybe inspired me to see the country. And some of them were long, even boring journeys that opened me to– I don’t know, new vistas or something that I didn’t have while I was growing up in Oklahoma City.

JEFFREY BROWN: And how did it become a theme of your art? Was it an overt thing that you decided to pursue as a kind of content for you as an artist or just developed naturally? How did that happen?

ED RUSCHA: Well I never sat down, planned anything out. There was no strategy, no agenda or anything. They seemed to be individual attractions I had for things like gasoline stations and, oh, like telephone poles and almost things that are overlooked or forgotten. And these things impress me in their own simple ways, I guess. The architecture of America, and especially the west, had an effect, and I began to focus, sort of piece by piece, of these individual things in my art, and somehow they began to add up.

JEFFREY BROWN: What did they add up to?

ED RUSCHA: Well, they added up to really nothing more than what this whole venture is, which is an unfinished journey. You know, it’s like I’m trying to follow perspective and maybe I’m searching for the vanishing point — that I hope I never reach!

JEFFREY BROWN: I’m looking at the catalog now, so I have it open to one of the very iconic paintings of yours, the Standard Oil Station in Amarillo Texas, 1963. So just to use that as an example: describe it for me.

ED RUSCHA: It’s like a box with words on it. And that, to me, is what most of this architecture that attracted me. On the highway and in these little towns, I would see boxes with words on them, and it began to creep into my aesthetic. And also there are, like, other elements to it that I was always impressed with. Those old movies that had passenger trains, where they would start in on one little tiny point in the very right hand corner of the screen and they would zoom into place to the upper left hand corner, and the passenger train seemed to– it was a like a bridge picture that would show the characters in the movie, you know, traveling. And that zoom factor, to me, had a place in making a picture. And I guess I was putting two and two together, that maybe it’s that element of a passenger train zooming into focus. And I began to see these gas stations as maybe doing the same thing. 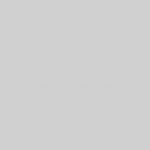